by the members of this Facebook group. ... CONCLUSIONS, LIMITATIONS AND FUTURE RESEARCH 6.1 CONCLUSIONS This study analyzed 200 gratitude expressions by Saudi males and females in Facebook to examine the role of gender on the ... 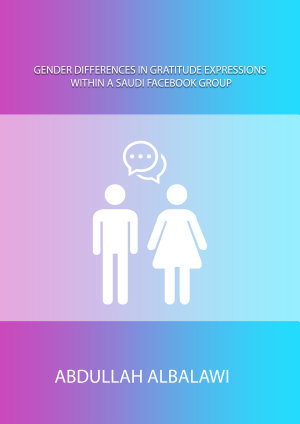 The study explores the strategies used by Saudi males and females when expressing and responding to gratitude within same and mixed-gender settings. There are few studies that discuss the relationship between gender and thanking in Saudi Arabia. Altalhi (2014) analyzed the ways Saudi females express gratitude in different situations, but doesn’t address strategies used by Saudi males. Hariri (2016) examined thanking only in emails between students and staff in an academic context. This study aims to answer the following questions: 1- do males in Saudi Arabia use different strategies when thanking females or do they use the same strategies that they use with other males? 2- Do Saudi females use more strategies than Saudi males? 3- Which strategies are used most by both genders? The data for this was collected from naturally occurring settings through an academic Facebook group. This virtual community of practice includes both males and females who either have or are pursuing post-graduate studies. The group was established so that the Saudi faculty members can gather and share their experiences and answer each other’s questions. It has more than 7000 members who come from different parts of Saudi Arabia. The group members work at state universities as faculty members and have relatively similar socioeconomic level since they have the same occupation and their salaries are standardized by the government with only small differences from one university to another. The paper analyzes 200 tokens of thanking with respect to the gender of the interlocutors. The thanking acts are divided into four sections (male to male, male to female, female to male and female to female). The results showed variation in the number and type of strategy between Saudi males and females. Although it was hypothesized that Saudi females would employ more strategies per thanking event than Saudi males, the data in this study showed the opposite. Saudi males used 15% more strategies per thanking event than the Saudi females. CMC provides an unprecedented means and new tools for communication and the way thanking is expressed in CMC is somewhat different from how it is communicated in face-to-face interaction since. In the case of thanking, the study showed that the participants made use of the new options available to them, which include emoticons and the post-like function in Facebook. The participants in this study were not reluctant to use what the new technology has to offer. In fact, the most frequent strategy in this study was the post-like strategy, which is an exclusive feature of CMC generally. On the other hand, the emoticon strategy was surprisingly not used as much by the participants in this group, which may be due to the lack of intimacy between the interlocutors and the general formal tone of the group. The innovative use of both strategies suggests that the quality and quantity of gratitude expression is not constant, rather it changes depending on the medium (e.g. post-like and emoticon strategies). As hypothesized, complimenting was shown to be the least used strategies in this study. It was suggested that the low imposition level of the favors asked and the lack of intimacy and social power differences between the interlocutors could be factors for the low frequency of this strategy. The category of benediction was found to be the second most frequently used category after thanking. The frequent use of this category along with its use as a single strategy show the deep influence of the Islamic religion on Saudi Arabic thanking. Expressing intimacy strategies were the second to last in terms of frequency, which is not surprising, since these types of strategies indicate lack of social distance between the interlocutors. The data in this study showed a lack of the title strategy use and a low rate of use for the honorific 2nd pl. strategy. This was mostly caused by the fact that the members in the Facebook group have equal social power. The most frequently used strategy in the address term category is a addressing members with their names, although in the majority of cases, Saudi males and females chose not to use an address term altogether. The second part of the results and discussion section examined the response to thanking strategies. In the category of acceptance, the most used strategy was the post-like strategy, followed by the strategies text and emoticon. None of the subjects attempted to play down or deny the need for gratitude expression, perhaps because all of the requests were of low imposition, as well as due to the lack of close social distance between the interlocutors. No response was found to be the most common thanking response. 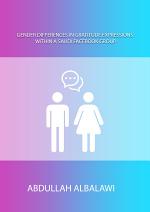 GENDER DIFFERENCES IN GRATITUDE EXPRESSIONS WITHIN A SAUDI FACEBOOK GROUP

Authors: Abdullah Albalawi
Categories: Language Arts & Disciplines
The study explores the strategies used by Saudi males and females when expressing and responding to gratitude within same and mixed-gender settings. There are few studies that discuss the relationship between gender and thanking in Saudi Arabia. Altalhi (2014) analyzed the ways Saudi females express gratitude in different situations, but